Airovation – We Care For Fresh Air! 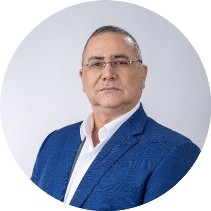 Mr. Maayan: Airovation Technologies is a company that started a couple of years ago as a startup company in Israel with a purpose to convert toxic smoke and gasses to breathable air.

CEOCFO: How are you going to do that?

Mr. Maayan: Our first goal is looking at emergency applications. The first R&D was supported by the Israel Innovation Authority. We managed to create a device that was tested at the UL Laboratories in Chicago. It takes the toxic smoke, pipes it in to one side, and from the other side delivers breathable air. We were able to treat and convert CO2 (carbon dioxide) with low concentrations of oxygen and turn it into high concentrations of oxygen.

To do this we are aligning our company with the scientists from the Hebrew University of Jerusalem. They are working on developing and managing the process of creating the Superoxide Radical in a liquid phase. Superoxide radical is actually oxygen with certain electrodes. It is one of the strongest oxidizers in nature, and the scientists were trying to work with this during the 1970s and 1980s for the space missions. The big breakthrough for our scientists was managing to create it not in a synthesized material, but actually create it in-situ, for example, inside the chamber. They filled this chamber with gases and toxic air. The idea was to move the air through this phase and minimize their concentration through a mineralization process of those toxic gases, creating a very interesting core technology, that after 5 years of R&D, we are seeing it moving forward to commercialization in 2 different fields.

CEOCFO: What are your target fields? Where have you been looking?

Mr. Maayan: The first field is something that came in the last 2 years. It started from our meetings with our partners in Korea and in China. During our discussions they told us they were looking for something to improve the wellbeing and health inside buildings, which meant to improve the indoor air quality. This desire to improve the indoor air quality was brought on from the concerns that COVID-19 could be transmitted through the air, and more so indoor rather than when we are outside in the fresh air. Therefore, there is much more concern about indoor air today than there was years ago. However, even three years ago, there was a high awareness of the air condition and how it has an effect on people. In particular in Asia, because of the pollution that exists there in the outdoor air, but the indoor air is also a big concern.

One of the things that we developed was a new generation of home enrichment systems that can take and treat and reduce the buildup of CO2 in the living room or study room in your house. Of course, this same core technology for the device can be installed and put in a meeting room of companies, offices, or clinics.

You might ask yourself why we need to reduce CO2, because in the West we are not really concerned about it. However, most of the studies that were done in Berkeley and Harvard, show that the sensors in our bodies that are actually in charge of how tired we are, are greatly impacted by CO2. Therefore, you must consider that we are the ones that are polluting the air when we are indoor. This is because we are the ones that consume the oxygen and our exhaling of CO2 and the buildup of the CO2 is actually going higher and higher the more time we spend in a room.

The researchers at the universities and other entities showed that the normal condition of CO2 in open areas in nature was 400 ppm (parts per million). However, indoor conditions were very fast reaching 1000 ppm, which would cause people in an indoor setting to become tired. Studies also showed that when reaching 1,400 ppm, we will be 50% less productive if you are working and 50% less sharp if you are studying. This is why the ability to create fresh air indoors is so important.

CEOCFO: Where are you in the process of development and bringing a product to the market?

Mr. Maayan: We just came back from Korea where we conducted 3 weeks of very successful tests with a potential partner, under conditions of a home simulation. Therefore, we believe that the device can be reaching the market within a year to a year and a half. I would say somewhere in the beginning or middle of 2023, we may see this device to be launched based on cooperation with strategic partners, like the one mentioned in Korea.

CEOCFO: Would this be part of the air conditioning system? Would there be a device in each room? How would it work?

Mr. Maayan: It is actually a standalone device, very similar to the logic of current air purifiers, but we not only bring the capabilities of the air purifier, we also bring the conditioner layer. You can think about it as a fresh air printer, with the same capability of other air purifiers like Dyson, with fans and a similar interface, but there is going to be an additional layer. It is going to be based on some kind of cartridge that actually filters through the toxic gases, and of course microbiologicals such as COVID.

When COVID arrived, it stopped us from being able to travel, but it also created opportunity. For example, in Israel a lot of laboratories got government support and created a very unique kind of capability for testing COVID. One of those laboratories was called, High-Labs. We conducted six months of tests with this laboratory and three of those were focused on tests against bacteria. When we achieved very good results in the elimination of the bacteria with our technology, we then conducted tests with live Corona and achieved 99.97 percent of elimination with a single blast of 2 second exposure - a very successful test!

This gives us an unbelievable value position that we are bringing to the market. One is the indoor capability of treating CO2 and neutralizing it, while the other is drastically improving our health and well-being by filtering out microbiological bacteria and viruses.

CEOCFO: Are you funded for your next steps? How far will your current funding take you?

Mr. Maayan: We are in the middle of fund raising right now. It’s moving faster than we had expected. We are now at $5 million, which will take us well into next year. We are expecting additional investors to be on board soon, and we constantly get many calls to accelerate the round now. The acceleration is coming from two angles.

The first angle, as I told you, is a very mature one. It is the indoor applications. With that we are not only creating an additional layer of protection and a next generation indoor purifier, but in some sense our technology can really have an immediate effect, not like the filter-based technologies that have been used up to now. Those particles that were treated by filters are useless unless you have medical problems such as asthma or allergic problems. The filters have an effect on your health by keeping the toxins from your lungs.

In our case, the technology can have an immediate effect on your performance and well-being. For example, in Asia there is a very high awareness of the need to support kids and their studying, so it should be in the room where they are studying, and it turns the room into a high-performance haven.

CEOCFO: There are so many companies with new ideas to look at. Why should Airovation Technologies stand apart from the crowd?

Mr. Maayan: There are many companies in the area of air purification, but no one claims that they can treat carbon dioxide. An additional important thing is that in our case, we are not heading in any way to an end product. We have really just created add-on products to existing products already out there. And to come full circle, the used refillable cartridge from the purifier has turned into a receptacle full of fertilizer that can be used to enrich your home tomato garden, so it is coming full circle with the “carbon to value” approach.

I think the biggest reason now for many entities to engage with us is because we are addressing a bigger problem in the world that has now started to be in focus. Three years ago, people were talking about treating CO2, but not taking it seriously. However, around the same time we started to develop carbon capturing technology. Today, after most of the world is turning to eliminating carbon emissions, many of those entities are now engaging with us and looking to scale up with our capability. One example of this is helping to turn companies that today are producing “gray” hydrogen, into companies producing climate friendly “blue” hydrogen in the future.

“This gives us an unbelievable value position that we are bringing to the market. One is the indoor capability of treating CO2 and neutralizing it, while the other is drastically improving our health and well-being by filtering out microbiological bacteria and viruses.”
Marat Maayan