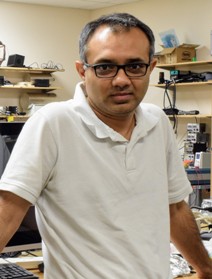 CEOCFO: Mr. Shah, would you give us a little history on QuSpin; how long you’ve been around, how you got started and got to where you are today?

Mr. Shah: Sometime in early 2000s, there was a landmark paper published by Princeton University. In that paper it was shown that that it is possible to make orders of magnitude more sensitive magnetic field recordings using an optically pumped magnetometer (OPM). Back then I was a graduate student at the National Institute of Standards and Technology (NIST), in Boulder, Colorado. In my PhD research, we were trying to build a device that leveraged similar technology, more specifically, we were trying to build atomic clocks. Because we were quite familiar with OPMs, when we saw the landmark paper, we were super excited and saw the potential to marry some of our own technology with the work that was done at Princeton. We quickly built some OPM prototypes and saw stunning results. This is when a spark was lit to form QuSpin to commercialize the new OPM technology.

After getting my PhD, because the Princeton work was so exciting, I joined the Princeton Group as a postdoc. I worked there for a couple of years and learned more about the technology and made contributions to the extent that I could. After finishing my Postdoctoral Research, I found a job building atomic clocks. Even though my new job was interesting, my heart was stuck in OPM technology. This was because the new OPM technology, if successfully developed, had game changing potential to fundamentally advance neuroscience and neuroimaging in particular. The new brain scanner built with OPM technology could allow real time visualization of the neural electrical activity inside the human brain with unprecedented resolution.

For this reason, I went to NIH (National Institutes of Health) and applied for a seed grant to start QuSpin. Fortunately, they agreed, and with the seed money I was able to quit my day job to start QuSpin.

CEOCFO: Therefore, what motivated your founding of QuSpin has to do with its biomedical applications.

Mr. Shah: That is right. Human brain is a very complex organ and right now we have very few tools to understand how it works and to diagnose and treat neurological diseases such as epilepsy, PTSD, Alzheimer’s, Parkinson’s, depression, OCD to name a few. A brain scanner built with the new OPM technology could allow non-invasive, high resolution imaging of neural networks inside the human brain. This can fundamentally advance our understanding of these diseases and allow us to build better treatments.

What connects magnetometers and brain imaging is the following. Whenever there is an electrical current that runs through a wire, a magnetic field is produced. The human brain is filled will neurons and the neuron communicate with each other using electrical currents. The currents produced by neurons generate magnetic fields. This magnetic field propagates through the brain tissue and the skull and can be measured outside the head using a super sensitive magnetometer.

The magnetic fields produced by the human brain are really tiny, about 10 billion times smaller than the earth’s field. This is why we need highly sensitive magnetometers.

CEOCFO: Are you still in development or have products on the market currently?

Mr. Shah: We do have products on the market. We just started selling OPM sensors. With these sensors, prototype Magnetoencephalography (MEG) brain imaging systems are being built all over the world. Although complete full head MEG scanner is still under development at QuSpin, there is so much excitement for the technology that universities are buying individual sensors and building their own systems to access the technology as quickly as possible.

In the last two years since we started shipping our sensors, around forty or fifty scientific research papers have been published validating our sensors, including in high profile scientific journals such as Nature. The technology clearly looks like it may be ready for the primetime. Right now, we are hyper focused on completing the development of our full head MEG scanners that can be used by hospitals and research universities worldwide.

CEOCFO: Will you be selling a product yourself or selling the sensors or a system to product manufacturers and let them incorporate it into their products? What will be the model?

Mr. Shah: Our eventual business model is still evolving. This is a complex technology on par with MRI scanners. We will likely need a lot of more resources and commercialization expertise than we currently have. To that end, we expect to partner with other companies and organizations to help bring this technology to the market. Partnerships could take on many forms, including us becoming akin to an engine supplier and then someone else makes and sells the complete aircraft.

CEOCFO: What are some of the applications and products in the geophysical space?

Mr. Shah: One of the big drivers in geophysical space is the defense market. For example, you would need our sensors if you wanted to hunt for submarines or other such objects. Other DoD applications including finding unexploded bombs or mines. In civilian space, there are many remote sensing applications. For example, you can mount our sensors on a UAV and scan for things like abandoned oil wellheads and such. In archaeology, our sensors can be used to find and map ancient human settlements. Number of applications in geophysical space is very large and disparate.

CEOCFO: Would you tell us about your relationship with the DoD?

Mr. Shah: The DoD has given us a considerable in the last few years and they are very familiar with what we are doing and exceptionally supportive. In recent years, they have also become one of our important clients.

CEOCFO: What is your sales and distribution reach today geographically?

Mr. Shah: We have two products right now. One is for the geophysical space and one is for the biomedical space. In the geophysical space, the US government has placed export restrictions on our products and we are only allowed to ship to a few countries outside US. For the biomedical sensor, we are allowed to ship worldwide. US, China, Japan and EU compose bulk of our sales. Right now, we do direct sales, where we get a PO (Purchase Order) and we ship. We have a small manufacturing, logistics and customer support team and they handle our commercial sales.

CEOCFO: Are you looking to raise funds or reaching out to potential partners?

Mr. Shah: The US government (NIH, DoD) has generously funded our research efforts and we expect the funding will continue for few more years. We are slowly weaning ourselves away from government funding by generating our own revenue from commercial sales. Government funding now accounts for less than 40 percent of our total revenue and we hope to be completely self-reliant as quickly as possible. To accelerate our commercialization efforts, we expect to grow our partnerships with other companies and organizations in the near future.

CEOCFO: In closing, why is QuSpin an important company today?

Mr. Shah: There are a lot of impressive scientific advances coming from academia. There is also a plethora of engineering talent and expertise. We pride ourselves on being able to merge science and engineering really well to build practical products that can make a massive real-world impact - something that has traditionally proven to be quite difficult.

“We pride ourselves on being able to merge science and engineering really well to build practical products that can make a massive real-world impact - something that has traditionally proven to be quite difficult.” Vishal Shah