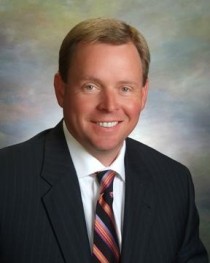 CEOCFO: Mr. Robinson, the bank was founded in 1868, then purchased in 1873 by James B. Prather and Theodore L. Robinson. First, are you a descendent of Theodore L., then would you give us a little background and history of the bank and how it developed from its founding?

Mr. Robinson: I am the fifth generation. It started in Maryville, Missouri on the corner and it is still there today. Obviously it has been renovated several times. The bank actually started as a hardware store and during the gold rush people brought their money and belongings in and stored them with the hardware store while they went out to the gold rush. Somehow that all made it turn into a bank. Theodore L, and James Prater ended up transforming it into a bank and it has been there ever since.

CEOCFO: Has the vision changed much from its founding vision?

Mr. Robinson: Obviously times have changed through the years. However, our principles on which this bank was founded, have remained much the same. We are very sensitive to our local areas. We try to give back as much as we can and we try to hire experienced people who are well-known locally and familiar with the needs of each community we are in.

Hard as it is to do, we are trying to stay ahead of the technology curve that is ever-changing. That said, we did not do anything crazy over the years and we stuck to our roots. We are fairly conservative and so far it has worked. Community banks are a dying breed and because of our size we are still able to maintain that personal touch and most of our customers appreciate that.

CEOCFO: Would you tell us about your role at Nodaway Valley Bank and how it developed to where you are today as Chairman and CEO?

Mr. Robinson: When I was a young kid growing up, I worked in the bank in the summertime as a teller, bookkeeper, and went off to college. I actually went to work at a bank in Memphis, Tennessee as a security salesman and the tax laws changed in 1996 or 1997. So when I came back to the bank and our bank in 1997 we became an S-Corp. When I got here, the bank was probably in the neighborhood of $250 million in assets. At that point we had a bank in Maryville, our main bank in Savannah, Missouri and we had just opened a bank in 1995 in Saint Joseph, Missouri which has a lot bigger population than we were used to.

I knew my strengths and weaknesses and I basically told not only my father but also the board that the only way this was going to work was for me to form an executive committee, and bring in some people that would help me run this bank. Therefore, I now have tenured people on our executive committee that can run the bank without me. We can also run the bank without them, but it is just a good team, and you have to surround yourselves with good people. My father did that, I witnessed that and I have done the same thing. We are still trying to do that, but it is getting harder as it is an ever-changing business.

When I first came in, I was a lender and then tried to work through some things. I was on the board, we had a president and he retired and made me president and then my dad retired from the Board of Directors as Chairman and CEO, so I became Chairman and CEO, and I named one of our people on our executive committee as President. We have a President, Chief Lender, CFO, Risk Manager, and that is how we have done it.

CEOCFO: In 2020, the bank’s resources topped $1 billion. Quite significant. Where are you today and how did you get there?

Mr. Robinson: Since I have been here, we have made two acquisitions. We bought another bank in St. Joseph, Missouri which brought us over that $500 million mark. We then bought a little bank in Mound City that has done very well in the agricultural community. In our recent transactions we have opened a bank in Platte City, Missouri and Smithville, Missouri. There was a big bank in those areas that sold out and we knew the cast of characters in those banks and they came to us as soon as they found out they were going to be purchased and we hired them.

We started with a loan production office and now we have two banks, one is Smithville and one in Platte City. That really opened the door for us as far as great lending capacity and a little diversification in our lending portfolio. The people we hired were well respected and had a lot of long-term relationships and so far, it has been a good match. Today we are about $1.3 billion roughly.

CEOCFO: Is branding important for you? When people drive by can they tell it is a Nodaway Valley Bank?

Mr. Robinson: Yes and no. We have never been big advertisers; we have always just tried to hire the people that have the relationships. We are very picky because we have a reputation to uphold. While we do some marketing and advertising, not really any of our banks look the same because we design them for each market. It is just a matter of finding the right people. I tell people that we can go buy a bank but if we do not have the right people, it is not going to work.

CEOCFO: You also have locations in Maryville, Savannah, St. Joseph, and Smithville as well as Platte City and Mound City. Would you tell us about the communities that you serve, and are they more rural or urban? What changes have you seen over the past two years?

Mr. Robinson: The northern Missouri communities are more rural however as a community bank we not only make agricultural loans, we will make car loans, home loans, we tend to do it all. In our agricultural markets we have some customers that are three and four generation farmers that have been with this bank through their families, so something tells me we are doing something right even though farm credit services company of the government has lower rates. We do not match their rates but it is the service I think that sets us apart from the other people.

CEOCFO: How many branches do you have and are you looking to grow that number in the near future?

CEOCFO: In 1942, Nodaway Valley Bank became the first bank in the area to hire an agricultural advisor. How do you stay on top of Ag lending today?

Mr. Robinson: Up in our northern banks some of our lenders are actually farmers, so they really understand farming.

CEOCFO: What are some of the challenges that you face in reaching farmers today?

Mr. Robinson: In the agricultural business the input costs are really large. Fertilizer is high, fuel is high and the cost of the inputs are high. Several years ago farming was not the best and we had some farmers that talked to us and we still stayed with them. We are in the business to lend and that is how we make money. We have a pretty good threshold and appetite for loaning money.

CEOCFO: Are you more of a business/commercial bank than a consumer bank? What is the mix and would you like to see that change?

Mr. Robinson: I think I would say we are community bank even though we have $30 million and $40 million loans to big businesses. We have a $6000 car loan on the books. We do it all. If the deal is good, the people are good and it makes sense on paper, we do it.

CEOCFO: Would you tell us about your investing services and how important they are for you and your customers?

Mr. Robinson: It generates some revenue but we realized our customers would go somewhere else if they had investment needs, so we thought we would start our own and they could invest with the company we use. It is just like our mortgage department; we never had one until I got here and decided to start a mortgage department because people were going down the street anyway.

CEOCFO: How is the bank funded? Do you have shareholders, investors, if so, how many and are you looking to grow that number?

Mr. Robinson: We do not pay out all of our profits, which results in a very strong capital account. The bank has been passed down through generations of the Robinson family. We do have some other large shareholders but for the most part we have a tight-knit group of shareholders.

CEOCFO: Since 2019, we have seen COVID and now inflation and economic challenges? How have you helped your customers deal with these challenges?

Mr. Robinson: During COVID we picked up customers after all the dust settled. Our Chief Lender grabbed a few people in the bank and we started helping customers with those PPP loans. We had customers that were not from our bank, their accountants would call and ask us if we were doing PPP loans and we told them we were on it and we were one of the first to help with that in our area. We never closed during COVID and we had branches where you could get a hold of us. We gained market share after COVID and I think it was just the fact that we were open and willing to help even if you were not a customer.

CEOCFO: In closing, what sets Nodaway Valley Bank apart from other local banks? Is community involvement important for you?

Mr. Robinson: We are very active in our communities and our people are very active in our communities. What sets us apart is we do not have the latest and greatest technology, but you do not wait 90 days to hear if you can get a loan. We can make a decision in about 30 minutes or faster if we need to. When we tell you we will do something, we will do it.

Our people just know how we operate and we are very protective of our reputation because that is the one thing that can really kill us. If we tell you we are going to do something we will do it regardless whether if we quoted a rate and it didn’t work, we will just live with our decision. When people need a bank, it is nice to talk to somebody. We are light on our feet and we are very nimble. We get a lot of referrals from our customers.

“We are very sensitive to our local areas. We try to give back as much as we can and we try to hire experienced people who are well-known locally and familiar with the needs of each community we are in.” James Robinson