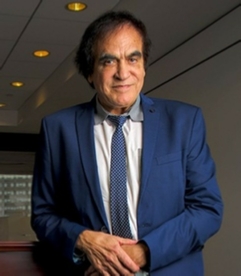 CEOCFO: Dr. Elmaleh, the first thing I see on the AZTherapies site is “Harnessing the power of Neuro-Immunology”. What is your approach?

Dr. Elmaleh: At AZTherapies we believe that neuroinflammation is what causes the fast progress of Alzheimer’s disease. The production of amyloid is normally slow and takes years. However, with neuroinflammation it is one hundred times faster, going through the brain and causing the killing of neurons. The killing of neurons is the cause of what we call Alzheimer’s disease. We approach this in two ways, using a multi-modal mechanisms of drug combinations. Both are addressing neuroinflammation and they are also addressing the oligomerization, accumulation, and polymerization of Amyloid beta (Aβ or Abeta) that we are all producing during our lifetime. However, when we age, what is happening is that some of us are producing a little bit more Abeta and some of us do not know how to clean it, so it starts accumulating and producing neurotoxic aggregates, plaques, and tangles, the oligomers interfere in synaptic transmission and plaque gets stuck is deposited in the brain network, causing an neuroinflammatory response in our brains. Therefore, when it spreads it becomes also toxic. That is one source of the toxicity that without the neuroinflammation takes many years to develop, slowly progressing through our hundred billion neurons and one hundred billion synapses, and it takes time to destroy them and compromise the brain network.

CEOCFO: What is the second source?

Dr. Elmaleh: The second source is the progressive neuroinflammation spread, which comes, maybe later, and starts the flash fire that damage the brain much faster. This progression results in massive neural death, expressed in Alzheimer’s and other neurovegetative diseases. Therefore, with one drug we are targeting activated microglia, a protein called CD3 and inhibiting cytokine production and the second is a low dose anti-inflammatory NSAID drug. These are two small molecules given in combination hoping to slow down or halt the neuroinflammation. I do not really think that there is a cure for Alzheimer’s or other neurodegeneration. We are all aging are kind of declining in our memory. However, if we can stop this process and allow for five or ten more years of normal function and cognition, we really are going to help a huge amount of people to be able to stay in their families and to have normal function. That is really the aim of our study.

CEOCFO: Why do these two approaches work? What is happening in the body?

Dr. Elmaleh: There are a few things that really cause a huge barrier for drug success and approval. Drug failure is not related to their science. The science actually works, because science is validated in vitro and in vivo prior to human trial initiate. The current therapies used to treat Alzheimer’s disease, such as, biologics, enzyme inhibitors and antibodies, fail of those are not working. They are trying to stop the production of the amyloids. However, it is really not helping the body due their side effects on the brain following chronic administration. As an example, stopping or modifying enzyme production with time changes the brain reaction to the treatment and adopt a pathway that affects the brain negatively, and the side effects overwhelms the disease-causing decline of the treatment. Another example; using an antibody to \wash the plaque in moderate and severe AD may have no effect due to the fact that the brain is already compromised by massive neural death. Removing plaque will have little or no effect.

CEOCFO: What is the feeling in the scientific community? Do they understand your solution?

Dr. Elmaleh: We actually kept our work under the radar for a long time. That was part of the strategy developed by Michael Porter from Harvard Business School and other members of our business board. They told us, “Just get the data instead of really arguing and trying to sell yourself early”. Therefore, that is what we did. Now we are almost at the end of the Phase 3 clinical trials. Slowey, we are increasing public awareness.

One thing that must be recognized is that the two drugs that we are using are very safe drugs, which is really an important issue when you deal with the treatment of Alzheimer’s. AD is not cancer. In cancer, you treat for three to six months, and then, remission or not, the patient comes back into normal function. In Alzheimer’s you have to treat for one year, two years, three years, or more. Therefore, the chronic administration process of the drug and its toxicity can overwhelm the disease and cause the progression of the disease to occur even much faster. However, what we have done is that we took two drugs that are approved by the FDA for some time ago and we made them available to treat neuroinflammation. Their safety is great, because you can treat patients for many years. Actually, those drugs were used in children over long period of time.

CEOCFO: Where are you today?

Dr. Elmaleh: We already completed randomization six hundred and twenty subjects from 1,755 people that were screened in US, Canada and Europe. The reason we need only 620 from that was because we homogenized the treated groups. We did three things in our trial; we used a battery of cognition, function and used biomarkers to determine the potential brain pathophysiology that indicates AD development.

In earlier studies they took people from fifty to ninety, which is forty years that is associated with differences disease staging, different dementia, vascular dementia, Louis body dementia, dementia from drinking alcohol, Therefore, in our study we limited the age from 55-79.

CEOCFO: What is the delivery method?

Dr. Elmaleh: We have one drug, which is given by inhalation once a day, and the second as is given as an oral pill.

CEOCFO: How do you measure the success? Is it all anecdotal? Is there a way to measure with technology what you see in the body?

Dr. Elmaleh: Our endpoint is really looking at cognition and function. We use the CDR (Clinical Dementia Rating) System, which is a computer based cognitive testing tool, developed to assess both enhancement and impairment of human cognitive performance. It is used in clinical trials with either healthy subjects or diseased patient populations. The idea is to show that actually the people have improved in cognition and function.

CEOCFO: You have a number of other solutions in the pipeline. Would you tell us about them?

Dr. Elmaleh: The next solution, which we actually now have in preclinical where the drug is delivered oral once a day for treatment. The drug shows much better activity in Phase 3 test that we are doing in the neuro dish. We can see that we are targeting the same CD33 and dealing with it in a much nicer way than current therapies. We are already doing the acute and chronic toxicity in animals.

We also have a new technology that is called a CAR-T drug, which is a totally new approach. They are now using this CAR-T drug approach in cancer, with some already approved by the FDA, such as Yescarta. We are looking at the CAR-T cells because they regulate inflammation. That one will take a little bit longer. It could be about two years before we can have an IND. However, that is part of our pipeline to try to treat Alzheimer’s disease.

CEOCFO: Are you seeking funding, partnerships or investment as AZ Therapies grows?

Dr. Elmaleh: Of course, we are always looking to do a partnership. We were under the radar for a long period of time, but just now as a company, have two people in business development, specifically for finding partnerships. We also are working with Health Advances, which is the company that looks into commercialization and to doctor’s acceptance of the new therapy and also what the process is to get into commercialization. It is a little bit expensive, but we are trying to get those numbers and that feedback we will have probably in about two or three weeks. Therefore, I think we are doing the right thing and we also started looking at possibilities to get into a partnership with big pharma. I do not think that we are going to be a fully integrated company, because our strength is in developing drugs. We have enough funds to complete the study, but the next stage for us is to find the right partner.

“What we have done is that we took two drugs that are approved by the FDA for some time ago and we made them available to treat neuroinflammation. Their safety is great, because you can treat patients for many years. Actually, those drugs were used in children over long period of time.”
- David R Elmaleh, Ph.D.